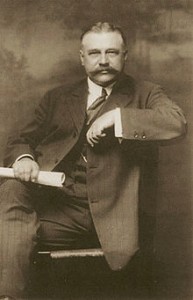 In the late 19th century, Kansas City had few paved streets and even fewer sidewalks, but the town was booming. As the population continued to grow and the city land size increased, the main focus remained on commerce and building places for people to live and work. There was, however, a group of citizens who saw the need for creating a better quality of life and improving the city’s appearance through the development of municipal parks, and later, a boulevard system.

The fledgling park movement continued to gather momentum until one of its firmest supporters, William Rockhill Nelson, moved to town and took up the cause. As the editor of the evening newspaper, The Star, Mr. Nelson used his position to campaign for paved roads and streets. He also advocated for improved sidewalks and sewers, decent public buildings, better streetlights, and more fire and police protection. His most enduring legacy, however, was the city’s park and boulevard system which he promoted with August Meyer, local businessman and president of the 1892 Park Board, predecessor to the Board of Parks and Recreation Commissioners. The Park Board hired landscape architect George E. Kessler (pictured) to design a boulevard and park system master plan that would provide for a “city within a park.”

Work on the boulevard system began in 1893 with the development of Independence and Gladstone Boulevards. Acquisition of properties began in earnest when, in 1895, the city approved a charter amendment to give the Park Board power to condemn land, issue bonds and receive special taxes. North Terrace Park (now Kessler Park), West Terrace Park and later Penn Valley Park were among the first developments. A milestone was achieved with a gift of property from Col. Thomas H. Swope, a pessimistic “knocker” of the parks plan. In 1896, Swope deeded to the city more than 1,300 acres, which became the park that bears his name and the largest park in the system. Another important gift to the city was that of Loose Park in 1927, donated by Ella Loose in memory of her husband, Jacob.